Pilot study into the effects of PPD resonance on healthy people’s lives (summery).

Research setup
Through this website about 100 people were asked to participate in a pilot study studying the effects of PPD resonance in their daily lives. During a 5 weeks period they were asked to listen to different PPD resonances on a daily base for a minimum of 10 minutes per day. 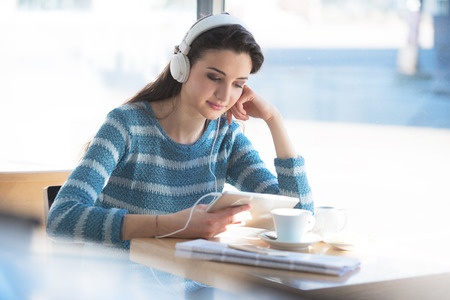 During that period they also had to fill out a questionnaire twice about daily life in the realm of mental and physical wellbeing. The group of participants can be described as ‘people living a normal life, showing mental stability and having a past without serious traumatising experiences’.

The questionnaire held two sections, one based on RAND 36 with questions about their actual situation and one where participants could score the impact (1-10) of PPD resonance listening in different parts of life.

The PPD resonance set people were asked to listen to was made up out of 3 different types of PPDs covering the following realms:

The concept of resonance
First, the concept behind PPD resonance is rooted in homeopathy and already discribed by . Hippocrates (the Greek physician born in 460 BC and known as the founder of medicine). He mentioned that there are two principles that can be used to cure symptoms:
1. substances can be used that create opposite symptoms − Contraria Contraribus Curentur and
2. substances can be used that can cause similar symptoms − Similia Similibus Curentur.

The contraria principle is what underlies regular medicine that is based on suppressing symptoms and killing microbes that cause diseases. The similia principle is the one used in homeopathy. This principle is based on resonance, and it is this healing principle of resonance that according to Hippocrates is the superior one. Many doctors in the world today when receiving their licence take the Hippocratic oath, based on the original text that is included in the Declaration of Geneva.

Secondly there is knowledge from neurobiology that points to the reptilian brain (brainstem) as being the 24/7 ruler of human behaviour. It is responsible for all survival mechanisms in our lives and reacts a lot faster than other brain parts like the mammalian brain (emotions) and the cortex (cognition). 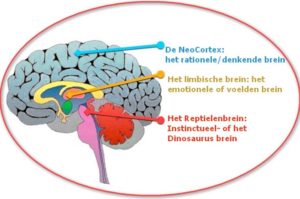 Many therapies and methods are interfering with activity in the emotional and cognitive brain, leaving the brainstem out. All stress or survival reactions start in the brainstem, so including this part of the brain is essential when aiming at reducing stress in all forms and meanings! Since the reptilian brain is pre-verbal one need to use the language it knows: resonance. And that is what we did.

Results
The key outcomes of the pilot study are clear: almost all participants reported effects in the domain of mental wellbeing. The top 3 shows that 78% of the participants experience more inner peace, 76% has more courage to step out of their comfort zone (more self-esteem) and 68% deals better with difficult social situations (less emotional drama both in intensity and time).

The following graph shows the percentage of people that experienced impact from PPD listening in different parts of life. 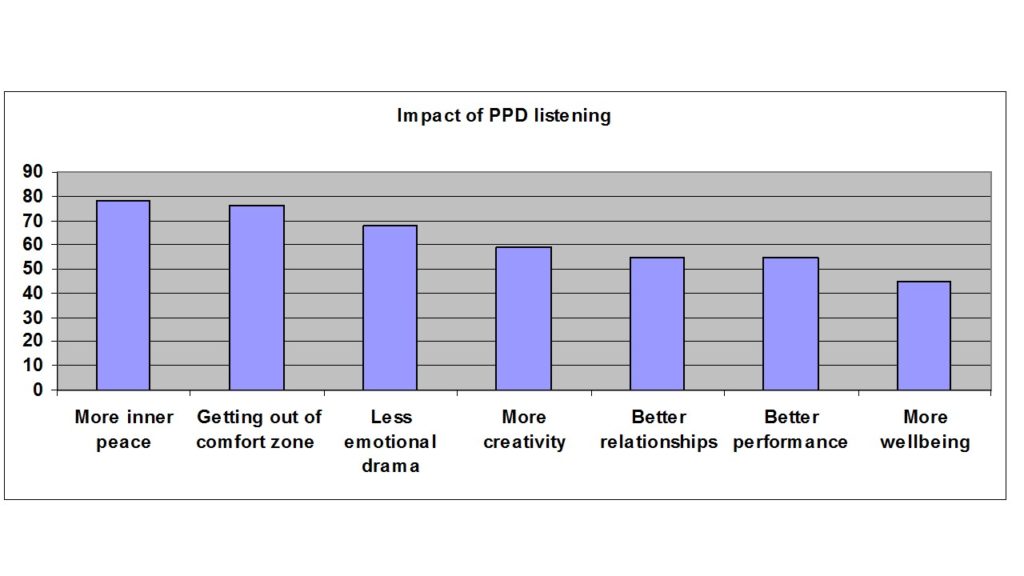 The same results now shown in a table.

Discussion
The most influenced parts of life seem to be part of the mental realm. That is to be expected since the participants were selected form a healthy group of people. Changes in the physical realm are therefore more difficult to experience. At the same time, every healthy person is very much aware of daily emotions. If there is a significant change in any way or form (less emotional drama, more forgiveness, etc.) it can be seen easily. The impact from a better mental state on the physical wellbeing is subject for upcoming research. Studies done with selected groups (people with severe addictions, children diagnosed with AD(H)D, people suffering from deep trauma) have been done and show also positive effects. See here.

Remarks from participants
Some remarks made by participants when asked about their experiences:
“I sleep a lot better, longer hours, deeper”
“I have noticed that I am able to show anger, which was impossible before this experiment; it gives me a lot of space”
“I notice a lot more clearity, I like that a lot”
“Introspection is suddenly quiet easy and very liberating“
“I experience a lot more inner peace at moments I use to panic”
“My judgements to others have become softer”